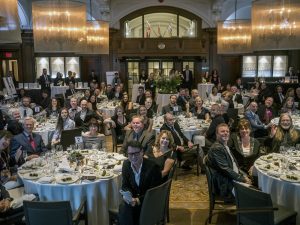 On Thursday, November 16, 118 guests turned out in support of the 4th Annual Chef’s Charity Dinner at the Vancouver Club and raised $46,765 for Dan’s Legacy. The funds will go towards the charity’s counselling and life-skills programs for youth affected by trauma-based mental health and addictions challenges.

“We’re over the moon at the phenomenal outpouring of support from everyone who attended,” says Barbara Coates, Executive Director of Dan’s Legacy. “Our message of harm prevention, especially in the context of the ever-escalating opioid health crisis, found a receptive and responsive audience. We made a lot of new friends which will have a huge impact in helping us grow our counselling services, and extending our reach to some of the most vulnerable youth in Metro Vancouver.”

The charity also launched its film “Passages”, which tells the stories of three young people whose lives were helped immeasurably thanks to Dan’s Legacy’s therapeutic counselling and life-skills programs.

Dan’s Legacy also recognizes and salutes its volunteers for the gift of their valuable time.

If you missed the gala but would like to support Dan’s Legacy, or if you know someone battling mental health and addictions issues who is asking for help, please contact Tom Littlewood (Program Director) at 604-999-9136  or tom@danslegacy.com or Barbara Coates (Executive Director) at 604-329-9186, or barb@danslegacy.com.